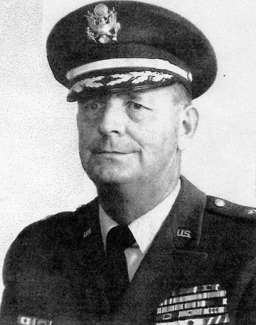 1953–1954 G3, Combined Command for Reconnaissance Activities Korea, with staff responsibility for the operational aspects of all “behind the lines” intelligence, unconventional warfare and related activities of the U.N. Forces and U.S. Agencies in Korea. Assumed command of the U.N. Partisan Forces Korea for the last part of the tour.

1954–1955 Deputy Commander and Chief of Staff, Strategic Operations Forces, Far East in Japan. Responsible for all unconventional warfare operations in the Far Eastern Theater and for the management and coordination of certain sensitive intelligence operations.

1955-1958 Chief, Operations Section, Intelligence Operations Division, Office of the Assistant Chief of Staff Intelligence, Dept of the Army (mission classified). Promoted to Colonel in 1957 and assigned as Chief Counterintelligence Branch.

1965–1966 Chief of Intelligence Operations Division, J2 MACV in Viet Nam. Responsible for the supervision and guidance of the intelligence collection activities of the U.S. military services, provided assistance to South Viet Nam and other friendly foreign services and coordinated these activities with other U.S. agencies.

1966–1971 Senior Military Advisor to the State of California. Retired as Colonel, Regular Army, 1971 at the request of the State to open and command Camp Roberts. Accepted commission as Colonel in the California National Guard.

Local – Served on various boards such as Airport Advisory and Red Cross. Worked with youth groups such as Scouts, Key Club, Circle K, and Keywanettes. Supported activities such as Community Concert and local theatrical groups. Organized Easter Sunrise Services for the community while commander at Camp Roberts. Served as Chairman, United Way Campaign and as State coordinator for 55 ALIVE. Currently, member of the Board of Directors of Paso Robles’ Pioneer Museum.

Family – Married to Mildred Harstad Muggelberg. They have two children: Glenn W., a geologist and Marcia L., a physician.