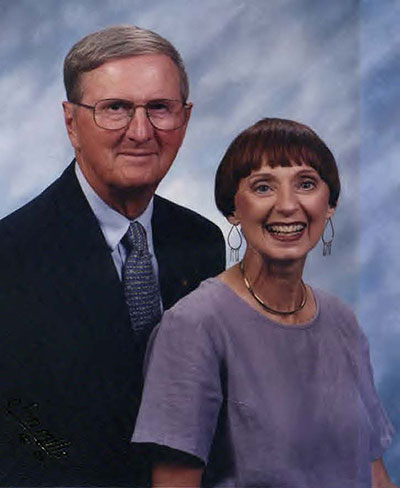 Colonel Wollenberg graduated from the University of Connecticut in 1953, with a BA in Government & International Relations. Upon graduation he was commissioned a Second Lieutenant in the Regular Army as a Distinguished Military Graduate. He entered Active Military Duty immediately following graduation. He subsequently received a Masters of Arts (MA) Degree in Management and Supervision from Central Michigan University.

Mrs. Wollenberg received her BA in art from Hamline University in Minneapolis-Saint Paul, Minnesota and, following that, studied fine arts for two years at the University of Colorado, Boulder, CO.

The Wollenbergs married in 1957. At the time, they were living in Colorado and Mrs. Wollenberg was teaching at what was then known as Camp Carson (now Ft. Carson). The Wollenbergs duty stations included Kentucky, Wisconsin, Connecticut, Kansas, Virginia, Washington DC, and West Germany. Colonel Wollenberg served two years in Viet Nam.

Mrs. Wollenberg retired in 1992 after 26 years of teaching. Colonel Wollenberg retired from Active Duty in 1986. After retirement from the Army, he was employed for four years (1986-1989) by Allen Corp./Singer/CAE Link Corp. as a Project/Office Manager.

To Doris, retirement meant more time to travel and to resume projects in art. Travel would take her to Manaus on the Amazon River in South America; Denali National Park in Alaska; to the Tierra del Fuego (Land of Fire), through the Strait of Magellan, and around Cape Horn at the southern tip of South America; at least twice through the Panama Canal; to Australia, New Zealand and Tasmania; to India, the Maldives, Seychelles and Kenya; to the Mediterranean, Italy, France and Spain; to Denmark; to the Danube and Eastern Europe countries once held under Soviet Communist control; and to China - the second time in 2006 as an “exchange artist.”

Colonel Wollenberg served on the National Board of Directors of The Retired/Military Officers Association of America (TROA/MOAA) and continues to participate in MOAA activities.

Mrs. Wollenberg passed away in May 2012. Colonel Wollenberg established a Designated Scholarship in her memory.

Additional information about the Wollenbergs can be obtained by contacting the MOAA Scholarship Fund office.