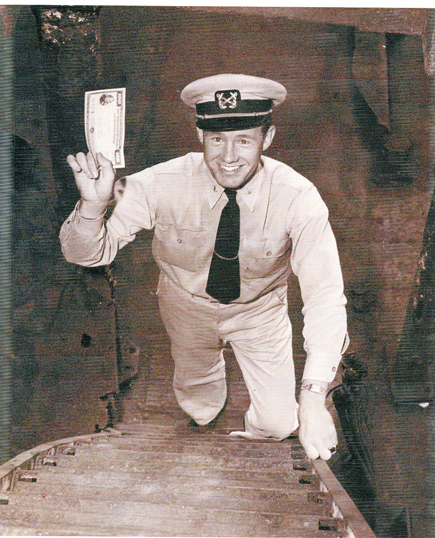 I am a Battleship USS Oklahoma (BB-37) Pearl Harbor survivor from that fateful day 68 years ago, December 7, 1941, a date which will live in infamy and the day that changed not only the course of history, but the course of so many of our lives.
Following my 18th birthday I enlisted in the United States Navy on August 3, 1938, as a Seaman Recruit. After completion of three months of Recruit Training at the U.S. Naval Training Center, Great Lakes, Illinois, I was assigned to the Battleship USS OKLAHOMA (BB-37). I reported for duty as a Seaman Apprentice on December 17, 1938 and served in the 3rd Division Deck Force and then the Supply and Disbursing Departments. I was a Storekeeper 2/C that day.

Bong-Bong, Bong-Bong went the General Alarm. To get things moving and to convince the whole ship they were under attack, the 4th Division Officer got on the General Announcing System and passed the words, “This is no drill, this is THE REAL THING, This in no blank, blank drill, damn it! They are real bombs – NOW GET GOING!”

I ran to the large porthole in the Pay Office and looked out and way a plane with the rising sun on the wing and the grinning pilot’s face because he was flying so low. I hollered, “Blank, blank, the Japs are here!” Just then the first torpedo hit. I ran out of the Pay Office and proceeded to the 3rd Deck to my ammunition handing battle station. I got there and started to close the watertight doors between compartments. When I close the last dog on the door, another torpedo hit, which hit a fuel tank, sprung the door, and I was completely covered with oil and had to clear my eyes. I turned around and notice water was pouring down from the 2nd deck ladder hatch.

I could feel the ship listing to the port side, and words were finally passed, “ABANDON SHIP! ABANDON SHIP!” Since I was by myself, I went up the ladder to the 2nd Deck where the water was waist high and met two of my shipmates. I noticed that two sailors were getting ready to close the main deck hatch and I said, “Hold it, we’re coming up!” My shipmates both refused and state that the ship would stop listing and they would be okay. I went up the ladder ant they closed the hatch. Later, I found out that they were trapped and did not get out.

I got to topside and made my way uphill to the starboard blister ledge where I saw the bombers in the air, like flock of ducks, and the Battleship USS ARIZONA go up after a direct bomb hit which lifted the 35,000 plus ton ship out of the water and shooting a ball of fire, flames, and smoke 400 to 500 feet into the air. In less than nine minutes, She sank with 1,177 of Her crew, a total loss, and after 69 years, She still leaks oil. The Battleship USS NEVADA (BB-36) was moored behind the ARIZONA and was the only Battleship to get underway that morning, despite two torpedoes and three bomb hits, but every enemy plane that could, went after the ship, hit again and again, and badly damaged, Her decks afire, She beached Herself in the channel a Hospital Point to avoid sinking an blocking the harbor entrance. In the anchorage, oil oozing out of damaged vessels caught fire and the whole area around Battleship Row was aflame and the smoke from the burning ships blocked the sun. Just then, my eyes caught a Jap Zero Fighter coming in on Battleship Row. I jumped into the water and ducked behind one of the large mooring camels that separated the two Battleships and saw the Jap Zero machine-gunning numerous shipmates on the Okie’s hull and in the water. I climbed aboard the USS MARYLAND and the sailors opened their lockers and got some towels to get the oil off my face and body, and handed me a clean set of clothing. I sat down and had a cup of coffee, my first cigarette, and noticed that my 21-jeweled Bulova wristwatch stopped at 8:04 a.m., apparently when I jumped into the water.

I was the only OKLAHOMA Pay Office survivor out of seven shipmates, including the Paymaster. The USS OKLAHOMA was salvaged, pumped out, the remains of more than 400 men removed, patched up, floated to Dry Dock Number Two, and officially decommissioned on September 1, 1944. While on a U.S. War Bond Drive on December 7, 1944, I went aboard my old ship and had my picture taken on the same ladder to the main deck that I used on December 7, 1941. I was flooded with memories of that fateful day.

The shipyards, fuel storage areas, and submarine base also suffered slight damage.
December 7, 2009 will be the 68th Pearl Harbor Anniversary, and I would like to pay homage and tribute to the 2,403 men who lost their lives, especially to my 443 deceased shipmates from the USS OKLAHOMA.

I close with words from a beautiful poem which pays tribute to those who died on that fateful day, December 7, 1941:

Man must begin to live as one,
No matter what the cost.
For all who died that Sunday morn
We bow our heads and pray
For them, please grant them peace.
For us…a better way.