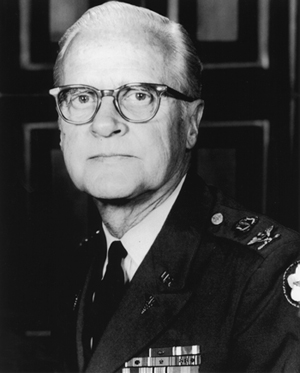 He completed his pre-medical studies at the University of West Virginia in 1935 and received his Doctor of Medicine in degree from Harvard Medical School 1939. Following graduation, Colonel Crozier served a two-year internship at the Methodist Hospital in Brooklyn, New York.

On May 27, 1941, Colonel Crozier was commissioned a First Lieutenant in the U.S. Army Medical Corps and entered active duty July 7, 1941. He was ultimately promoted to Colonel, Medical Corps, July 27, 1959. During World War II, Colonel Crozier served in the Middle East Theater as Attending Surgeon, U.S. Military North African Mission; Surgeon, Heliopolos Depot; Surgeon, Libyan Service Command; Surgeon, Tripoli Base Command; and Medical Inspector, Delta Service Command.
In 1944 he returned from overseas to serve as an Instructor at the Medical Field Service School, Carlisle Barracks, Pennsylvania. He moved with the school to Brooke Army Medical Center, Fort Sam Houston, Texas, continuing in this assignment until July 1947. During seven months of this period, Colonel Crozier was detailed to the Byrd Expedition to Antarctica as the Army Medical Service Observer.

The latter was interrupted by the Korean War and in August 1950 he was assigned as Chief of the Medical Service at the U.S. Army Hospital, Camp Rucker, Alabama. Following this assignment he served as the Medical Consultant to the Eighth U.S. Army, Korea. In 1954, Colonel Crozier became Chief of Medicine at the Ryukyus Army Hospital, Okinawa. In 1956 he returned to the United States as Assistant Chief Medical Consultant, Office of the Surgeon General, Washington, D.C. Two years later he was appointed Chief Medical Consultant.

In July 1961, Colonel Crozier assumed command of the U.S. Army Medical Unit at Fort Detrick, Maryland, which became the U.S. Army Medical Research Institute of Infectious Diseases in January 1969. In addition to his primary duty as Commander, USAMRIID, Colonel Crozier served as Consultant to the Surgeon General, Department of the Army, for infectious diseases and medical defense against biological warfare; Deputy Director , Commission on Epidemiological Survey, Armed Forces Epidemiological Board; United Stated Representative to the Panel of Experts on Medical Aspects of Biological Operations, North Atlantic Treaty Organization; and Associate Professor of Medicine, University of Maryland.
Colonel Crozier was certified by the American Board of Internal Medicine and held the “A” prefix awarded by the Surgeon General for outstanding achievement in his professional specialty.

Colonel Crozier retired on March 31, 1973. During retirement he served as a director of the Whittaker Corporation Indonesian Hospital Project, was a member of the Red Cross, and served on the Service to Military Families Committee at Fort Detrick. He also enjoyed gardening, raising prize roses, framing pictures, caning chairs, and making candles.
Colonel Crozier died on January 11, 1994 in Frederick, Maryland, and was interred at Arlington National Cemetery. In his will, Colonel Crozier bequeathed his funds to the Frederick YMCA and to the Building Fund of the Frederick American Red Cross. He contributed to the Music Trust of Frederick County, which promotes music appreciation, supports local band and concert activities, and assists talented and financially needy students at the high school and college level. Colonel Crozier also established a scholarship fund with The Military Officers Association (MOAA) in honor of his wife, Mrs. Margaret Patton “Patty” Crozier, who predeceased him on April 2, 1983.