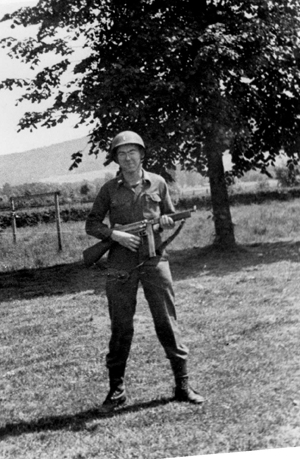 I was born in 1924, the youngest of three children. My father was a career naval officer, my mother an ex-school teacher. We lived in some interesting and unusual places. Graduating from Piedmont High School in June 1942, I worked that summer in a naval shipyard before entering the University of California, Berkeley. Shocked by our defeat and loss of four heave cruisers in the Battle of Savo Island, I enlisted in the U.S. Army as a “buck private” in December, 1942. I received basic training as a tanker at Fort Knox, Kansas where I later attended OCS. Shortly before my 19th birthday, I was commissioned as a temporary reserve officer, and trained recruits and draftees at Fort Knox.

Shipped to Europe as a casual replacement in late 1944, I joined the 771 Tank Battalion in the Siegfried Line Country north of Aachen, Germany. By V-E Day, the 771 Tank Battalion had fought in the Battle of the Bulge, joined the drive to the Rhine River with the 84th Infantry, supported the 17th Airborne in the Rhine River crossing, and ended the war on the Elbe River west of Berlin, Germany. I was a 20-year old tank lieutenant. I wasn’t old enough to vote, enter into a contract, or serve on a jury. I couldn’t even marry without my parent’s permission, but my war was over and I had survived. I returned home in 1946 to re-enter UC Berkeley, but I kept my reserve commission.

In 1948, I returned to active duty, and served the balance of 29 years as a reserve officer on active duty with tank and armored cavalry units assigned stateside, and in Germany and Korea. I spent 20 years training and preparing for combat during the Cold War, but never again heard a shot fired in anger. Since I spoke German, in 1950, I was assigned as a member of a Military Intelligence detachment in Berlin, where the Army chose to keep me, so I missed the Korean War, although I served with the 6th Tank Battalion in Korea in 1956-57. In 1965, I retired with the rank of Lieutenant Colonel and returned to college for 3 years.

I earned a Master’s of Art in History, and found a job teaching U.S. History and U.S. Government at San Benito High School where I taught for 17 years. Since retiring in 1984, my wife and I have traveled a good bit, and I enjoy life as a retired “country squire” in rural San Benito County, California. I serve on the Fort Ord Retiree Council, and work with MOAA and NAUS in the interests of our active duty and retired military members.