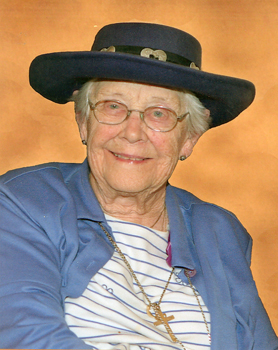 In my 90 years, the scholarship for my beloved husband, LTC John S. Neary, USA (Ret.), has been one of the most rewarding things in my life. We were children of the Great Depression and college opportunities were not readily available when we finished high school.

John’s education was obtained by on-the-ground experience with engineers until his number was called in the draft in 1941 to serve one year. His military years were most important to him and, though he went from Private to Lieutenant Colonel, in those years, he always felt he could have contributed more with additional education. Retiring after twenty-six years of service, he always regretted not having more education. This is why it seemed the most important thing for me to do as a memorial for him.

My life began in Bay City, Texas, in my maternal grandparents home and then to Tiptonville, Tennessee, where my father’s family lived. So, for years we were back and forth from Tennessee to Texas, returning in 1928 to Texas where I’ve been off and on until today.

My education was one year of college at Christian College, Columbia, Missouri, and 2 years of business school in Houston, Texas. For 45 years, office work was my life. Since retirement, my days are spent in volunteer work at the library, museum, St. Mark’s Episcopal Church, and other organizations.

My one child, Dale Coe Simons, and her husband James K. Simons gave me three grandchildren and now I have 8 great grandchildren to enjoy. It’s all been a wonderful life.