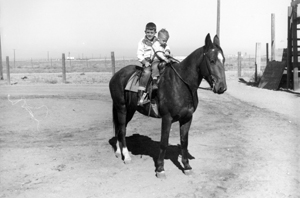 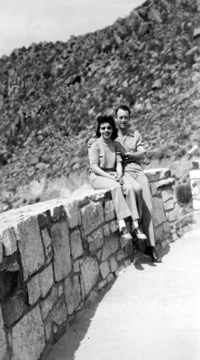 Mrs. Case’s father, Floyd Todd, was a farmer in Vernon County, Missouri who was known for his kindness to, and understanding of, animals. He died in March 1935 after he developed pneumonia helping rescue, with his equine team, an automobile stuck in the mud near the family farm. His lungs had been weakened as a result of being subjected to mustard gas during World War I, where he served as a Wagoner (a person who drives a wagon or transports goods by wagon).

Only days after her father’s death, Mrs. Case’s 1&frac12; year old brother Jimmy died of a respiratory illness, leaving her mother to raise her two daughters, Carol Jean and Patricia Joan, as a single parent supporting the family as a schoolteacher in a one-room schoolhouse in rural Milo, Missouri.

Major Rodolph Case (1920-1979) served in the U. S. Air Force for 22 years, retiring in 1962. During WW II, he served as a B-24 pilot in the 93rd Bombardment Group, 409th Bombardment Squadron. He was shot down over Gotha, Germany in February 1944, and was incarcerated as a prisoner of war at Stalag Luft 1. The Mississippi Armed Forces Museum near Hattiesburg features an exhibit on Major Case’s imprisonment and contains a unique diary he wrote as a prisoner.

Though Mrs. Case did not complete college, it is clear she valued education. She was particularly proud of her son Steven’s MBA. from the Thunderbird School of Global Management in Glendale, Arizona.
Mrs. Case was a dedicated volunteer at St. Joseph’s Hospital and a member of the First Congregational United Church of Christ in Phoenix, Arizona. She valued kindness, renounced conflict, and loved to laugh. There was an element of privacy and dignity to Mrs. Case’s character. Many who only knew her later in life were unaware of the tragedy she suffered losing both of her adult sons, Steven (1952-1990) and Scott (1958-1988), to accidental death. Perhaps because of her experiences with grief, those close to her valued her as a wise and trusted counselor.

Mrs. Case’s gift to the MOAA Scholarship Fund commemorates her life and family and honors lifelong friendships with fellow military families. If Mrs. Case could see how college students are helped by the scholarships established in her honor, perhaps she might say, in her modest way, “Well! Isn’t that something?”